AVAILABLE TO THE PUBLIC FOR THE VERY FIRST TIME. NEVER BEFORE HAS IT BEEN POSSIBLE TO PREDICT BIG JACKPOTS. THAT HAS ALL CHANGED WITH THIS ENHANCEMENT. IF YOU WANT THE NEWEST AND MOST-EXCITING WAY TO PLAY VIDEO KENO...FOR ONLY $89...

Would you like to have more fun playing a slot machine than you have ever had in your life? Here is how you turn an almost, ordinary (I only say “almost ordinary” because I don’t think any slot machine compares to Video KENO) machine, into one of the most fun, addictive, and possibly richest payout games...you have ever played...on any machine...in your life! It is called the “OO System.” You must have already purchased the “OTS System” to qualify for purchasing this system. This is because there are many items included in the “OTS System” that are not covered in this new “OO System.” If you have, you can buy this system now...for a limited time...for only $89. Just CLICK HERE. If you are here for the first time as a new customer, you can buy the $149 package on this site (or buy it for $99 by clicking the right hot spot), then CLICK HERE and buy this new and exciting “OO System,” for a limited time...for only $89. You will have no problem agreeing...playing slots will never be the same for you again!

I must say it’s been a long time since I’ve been as interested in a system as I’ve been with yours… and the game of keno in general. Accordingly I tried it several times with no big jackpots and honestly some frustration. However, continuous feedback and communication with you proved itself in my winning my first 7 out of 8 jackpot! Perhaps more confidence in the system played a vital role as well. I guess it’s like anything else…such as softball (my favorite sport to play). If you’ve been swinging a certain way and then take lessons from a pro, and they teach you a new method, you have to implement it long enough until you see results. I look forward to “many more home runs” in the future.
BU- (Albuquerque, NM) 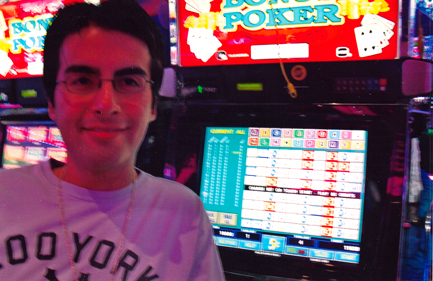 I love your system and it’s the first system I’ve found that actually works. I’m so excited to play Video KENO whenever I get a chance. I ordered your Video KENO system in February of 2010 and have consistently hit 7 out of 8s as well as one 8 out of 8 on a 5 cent wager.
Thanks and best regards,
R. L. Draper, Utah.

“I LOVE playing keno, and would get so disappointed when my numbers wouldn’t come in esp. after playing for hours and hours and chasing the numbers to no avail. I look forward to playing again, with excitement, not dread, because I know this system works! My first time using it I hit three jackpots in one day! Two of them were 8/8 for 2000.00 each and one 7/8. Since then I’ve hit 7/8 at least 2 times a session, every time I’ve played! This system works and I am no longer at the mercy of the machine! Thanks Charlie!” 🙂
Jennifer…Port Huron, MI

“It is unbelievable!!! I used to hate playing Keno. The reason is I used to change numbers every pull. You know, I used to play all over the board and be on the mercy of the machine. I have been following the principles and processes for about a month on 25 cent machines. I’ve got at least two 7 out of eights every time I go to the casino. It really works, make sense, and it it is wonderful !!!
Roger D., Riverside, CA

“I have never read or heard anything that made more sense than these principles. They’re easy to follow…and more than anything…THEY WORK! Thank you.”
Phil…Albuquerque, NM

“I have played slot machines for years. Regardless of the game, it always felt like I was at the mercy of the machine. For the first time, I can sit down and feel like I have more of an upper hand.”
Jan…Schenectady, NY

“I have always played the board games because I prefer numbers to lemons, oranges, cherries and the like. Wow! If you like numbers, there’s nothing like Video Keno, and you are so right. There is nothing like the feeling of the house paying you off in dozens of hundred dollar bills!”
Jack…St. Louis, MO

“I have played Video Keno for many years. What you describe most people do is right on the money. Your analogy of whiffs in golf and hitting a baseball, along with the “fills” made so much sense. I hit over $16,000 in jackpots in two days. I’ve never done that before.”
Betty…Denver, CO

“I followed your system to the letter. I had just hit a 7 out 8 playing two dollars. The numbers were “hot.” Instead of jumping to another pattern, I stayed there. It repeated again in 4 pulls. I promise you, everyone would have missed that jackpot.”
Alan…Philadelphia, PA

“Late fills, repetitive fills, top and bottom fills and zero fills are like big thunderheads announcing an approaching rain. You are so right! I never used to play like this. I stay with my pattern until I begin to see these, and know something BIG is coming.”
Marla…Sioux City, IA

“Where was all of this information for the last 15 years?”
Bryan…Topeka, KS

“Just tried your new OTSS system. I have never seen anything like it. I played Four Card Video KENO for 6 hours. I hit two 7 out of 8s, one immediately after I switched columns per your system, and the other on the very last dollar I had in the machine before reloading. I wish I would have found Video KENO…and your system…years ago.”
Larry…Las Vegas, NV